Cool, dry, sunny weather provided the perfect conditions to take part in the MABAC event at Nonsuch Park. Just under 40 Windmilers showed up to either run the long course of 5miles or the short one of 2.5miles. The unusual route may have been a little wet, muddy and slippery in parts but that didn’t stop Daniel Reynolds from finishing second overall in a time of 28:12, with fellow Windmilers Richard Cohen coming in fourth (29:36), closely followed my Graham Bell (29:38) in fifth.

For lady Windmilers, it was Bernadette Maher Allan who crossed the finishing line first in 37:17, with Bernie O’Donovan in second (38:23) and debutante Jo Leverett in third (41:53).

On the short course of one lap, Ella Waddington (who had run Beachy Head Marathon the day before) topped the Windmiler results table, finishing in a time of 25:04.

Well done to everyone who took part. All Windmilers, and a few friends from other clubs, were refreshed by the excellent flapjacks, cakes and coffee provided by John Sabourin and Sally Jones. As is usually the case, we were the last to leave the park after lots of chatting.

The next MABAC Is on Sunday 21 November, 10am, at Farley Heath. Contact Colin Harris at [email protected] if you need a ride. And the one after that is on Sunday 5 December at Winterfold Forest.

We are currently in second place, behind Dorking Mole Valley, so we need as many members as possible to run to earn the club points, so put that date in your diary now – and see you there! 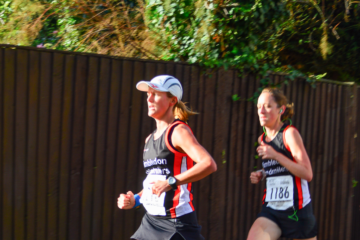 The Surrey Road League is back!

Summer is the time to put the cross country shoes into hibernation and get out your road shoes. Unbelievably, the Surrey Road League starts next week (Sunday 13th March). For those that haven’t taken part Read more…

Get in touch with Claire and Pete on [email protected]